The School is My Mother: Steven in Mandarina 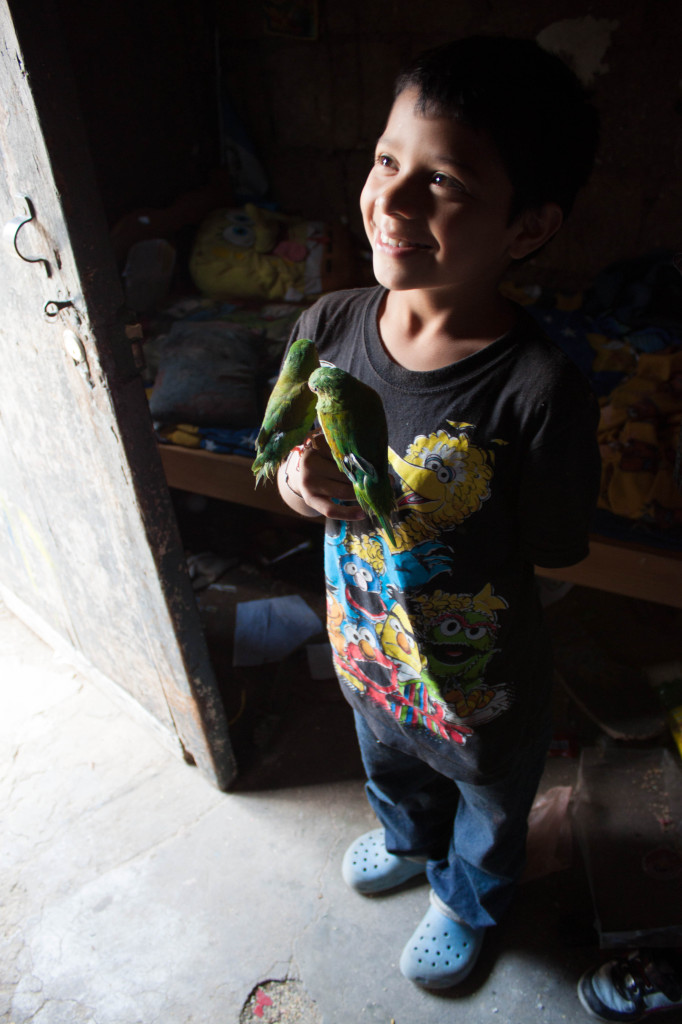 Steven and his parrots

It’s their first day of English class this year, and my second day teaching in La Limonada. We play a game where the students have to guess the correct color in English. “The color of the sky?” I ask. It’s boys versus girls, and the would-be fierce competition is quelled by Steven, who calls out the answer as hands fly up in the air. “Steven, please remember to raise your hand when you know the answer, or your team will lose points.”  But Steven is excited and starts flinching before I ask the next question. He shoots one hand in the air with the other over his mouth, and runs to the front of the classroom. “Yes, Steven.” “Yellow, yellow!” he can hardly contain. Yellow is the color of the sun, and coincidentally, Steven’s favorite color.

With the same energy, Steven gives me a giant hug, flashing a toothy grin before I leave for the day. This is our first encounter. I’m told that this kind of unbridled affection is typical of Steven, and am surprised to learn that he’s more often the troublemaker. A ten year-old at the Mandarina school, Steven is described as sociable, playful, and very intelligent, making the top grades in his classes. Due to misbehavior, he was expelled from his private school last year and now attends a larger public school in the mornings, where he receives less attention. “He used to act out a lot—throw things, hit his classmates” says Priscilla, the Mandarina school psychologist. But he’s made a transformation over the past couple of months.

“The school is my mother,” says Steven to Priscilla about Mandarina.  Because Steven’s mother is a nurse and works very long hours, and without the supervision of his older siblings, he’s left largely to care for himself. However, he’s found a second home in the thorough concern and attention of the Mandarina School team. His teacher Gladiz takes care to iron his uniform, to help him with his schoolwork, to see that he finishes his lunch and brushes his teeth. She’s instated a point system in which he gets stickers for behaving—a small reward for a great effort.

For Steven’s misbehavior is likely a combination of his most vibrant spirit and a most narrow outlet. His older sister, who used to act as his primary caretaker, has since left the home, due to a contentious relationship with her mother. His older brother has enough to worry about between his job and education. Steven has trouble getting along with other students, and who could put it beyond him; between expulsion from school and a regularly empty home, a pervasive sense of abandonment provokes his masked cries for attention.

The transforming love exercised by the Mandarina team is the same transforming love of Jesus, and this is why Steven can call the school his mother. It provides the understanding Steven needs when he’s misbehaving, and the encouragement to be the wonderful, affectionate, and expressive ten-year old that he really is. The love and grace practiced by those around him is reflected in the loving and gracious person that Steven is growing to be.