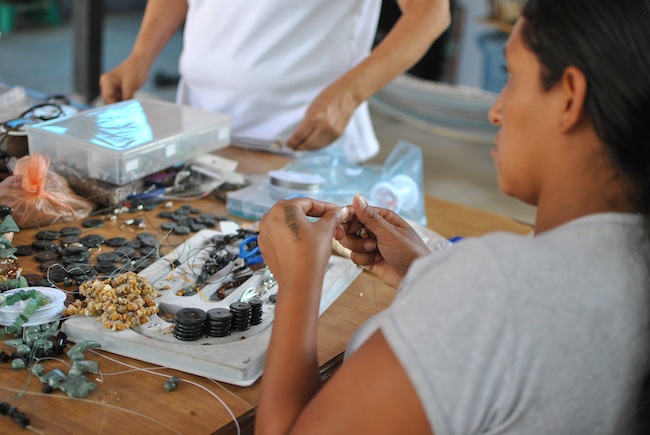 At first, the thought of going to vocational training was not one that excited Susana*. When she began attending in 2010, she was used to life on the streets, selling various wares, from cookies to socks. The hardship of her life affected every facet of her life; she had no self esteem, her relationship with her two teenage sons was very unhealthy. There was a complete lack of peace in their home, with constant fighting and physical abuse.

When Susana first began her training to make jewelry, she only came three days a week. Susana was uneasy with being a part of the training program; she had fears of being yelled at for not doing things correctly, and of being treated without respect, as she was used to in her hard life. Instead, she was greeted each day by Katy, the woman who trained her, with the traditional Guatemalan hello, a kiss on each cheek. Her training continued with patience and love, and Susana began to soften.

Her fears were gone as she found herself surrounded by a community of people who cared about each other. Her inability to love or respect herself prior to coming to the vocational training was melting away, and Susana learned to accept herself. She not only makes the jewelry designs that she was trained in, but she has begun to create her own designs as well.

Susana’s life and her relationship with her children have changed drastically. Instead of the constant fighting, their home is filled with peace and respect. She learned that if she treated her children properly, that this would be reciprocated back on her. She admits that there is still a long way to go, but her outlook on life has changed so much. She realizes that she is capable of making her life better, and this hope has empowered her to continue working, changing, and loving her family.

Our Vocational Training Program is currently focused on teaching women the art of jewelry making. In partnership with Women At Risk, International the jewelry they are making will be made available in late 2012. Proceeds from the sale of the jewelry will establish and sustain a shelter for abused women from La Limonada and their children.

*Name has been changed to protect this person’s identity