One of our child sponsors, Nona, from the Cincinnati, OH area, has been to La Limonada two times in the past six months and has passionately shared with her friends about what God is doing in the community and in the lives of the children there.

Nona’s experience in La Limonada inspired her friend, Susan, and her family to sponsor a child… and Susan’s son, Sam, was inspired to dedicate his birthday to helping the children in La Limonada. 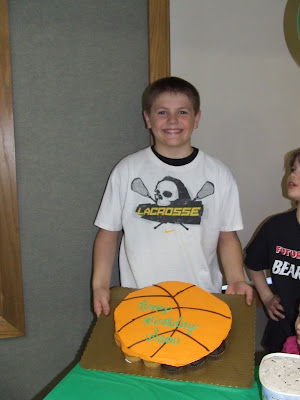 Here’s the story of Sam’s birthday party from Susan…

“A couple of months before Sam’s 11th birthday we were talking about what he might want as a gift and about party ideas. We had thought about sponsoring some type of organization the previous birthday and it just didn’t work out. After our friend, Nona, had made her visit the Guatemala we really felt led to sponsor a child. Sam is the only brother to 4 sisters and wanted brother! So, the decision to sponsor then turned into ‘what more could we do’.  There was our party idea!

We had the party at our church gym and Sam invited all of his friends and classmates. We played dodgeball, basketball, and had all kinds of contests. The kids had an awesome time! We set-up a Lemonade Int’l table at the entrance to the gym. I had included pictures from Nona’s trips and made a notebook with information about La Limonada. We had lots of questions and a lot of interest from the parents and kids about La Limonada.

One mom said that when her son received the invitation he was very puzzled by the fact that it said ‘no gifts’. She later said ‘thanks for showing that everything doesn’t always have to be about us’.”

With the help of his friends, Sam raised $360 from his birthday party for our work with the children of La Limonada!

Sam, thank you for following your heart and for dedicating your birthday to the children of La Limonada!