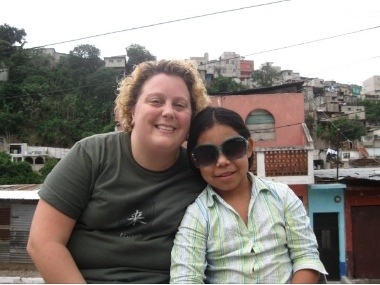 Kerry Smith will be the third full-time international worker serving with Lemonade International in La Limonada. She leaves the Raleigh area this week to spend some time with family and will arrive in Guatemala on January 16, 2010.

For the first four weeks in Guatemala, Kerry will be attending Spanish language school in Antigua, Guatemala (about an hour from Guatemala City). She will then be joining the team to serve at the schools in La Limonada.

About Kerry Smith (in her own words):

I’ve always wanted to work and be a productive member of a community in a foreign country. Going to work with Tita and the team in La Limonada is literally a dream come true for me.

I have a younger sister and brother (Sara and Scott). My niece, Kassidy, is my favorite person in the world. I can’t imagine what life will be like without her. I have another niece named Sophia. Sophia is the daughter of my oldest and best friend, Bonnie. Both of my nieces are going to be 3 this spring and neither of them call me by my actual name. Kassidy calls me Kiki, and Sophia calls me Auntie Dink (high school nickname).

My favorite color is purple. I wear a size 9 shoe. I love to knit, I find it relaxing. With the exception of my nieces, I think that I’m going to miss my car the most when in Guatemala. It’s a 2004 purple PT Cruiser.

I like to have an hour alone at the end of every work day to talk to God.

My 36th birthday will be spent at language school in Antigua (January 22nd).

I believe that God has given me the gift of the year 2010 to live out my dreams. I have never been happier than I am today.

To support Kerry on this journey, go to our Donation Page and choose the “Support A Team Member” fund then select her name in the drop-down menu that appears.

You can also follow Kerry’s journey through her blog.